The late start of the bush fires this year has meant that food for the elephants and other wildlife in the Mosi-oa-Tunya National Park has lasted longer than normal. The fires started in earnest about two weeks ago, and because it is now so dry most of the grass and many trees have burnt. The sky is constantly hazy,  the smoke burns your eyes and throat and everywhere you look you can see plumes of smoke billowing above the horizon.

The elephants are hungry and on Monday night we had our first incursion of the season. Piet received the call at around 01.30 in the morning and was out until just after sunrise – luckily he and the guards managed to keep the elephants out of the wheat.

Late Monday afternoon we were driving through the park when we came across a herd of around 60 elephants eating in a small patch of bush that has escaped the fires; we think it was the same herd that came to try to sample our wheat that night.

Would you believe there’s an elephant standing right behind this bush? You can just make out its outline: 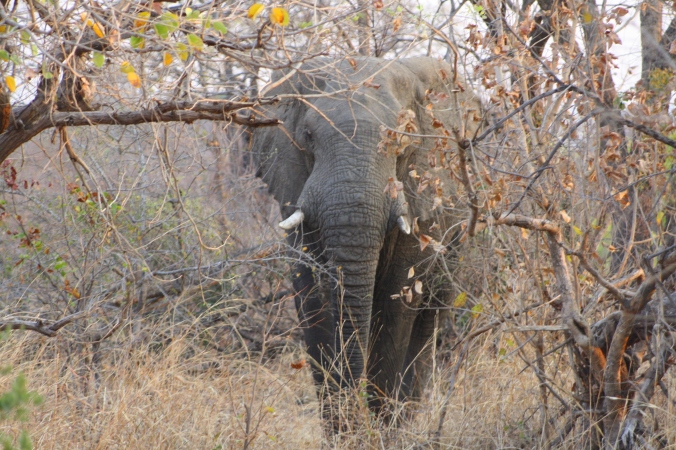 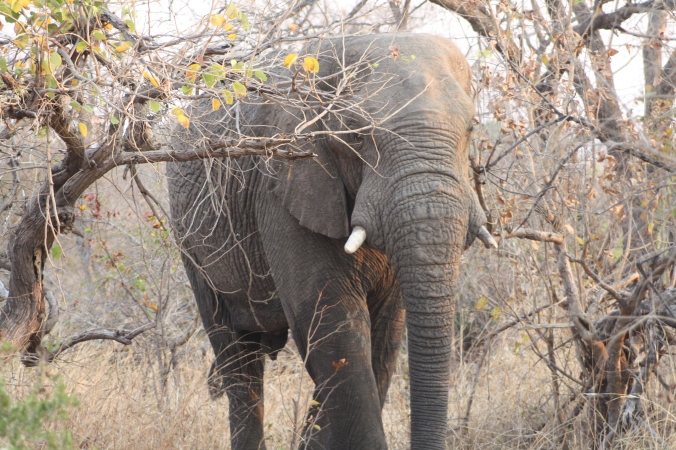 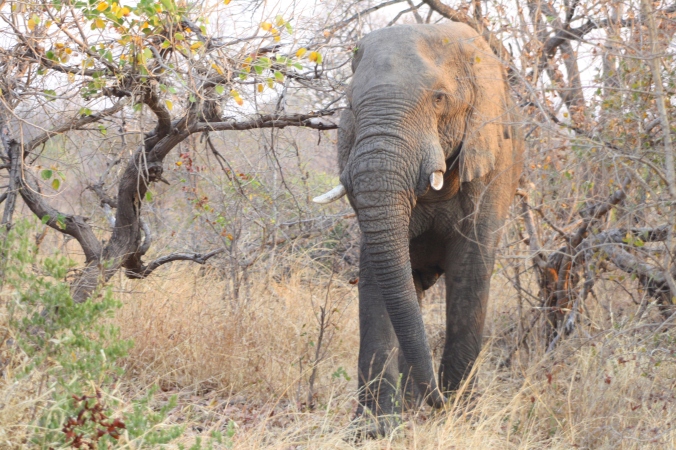 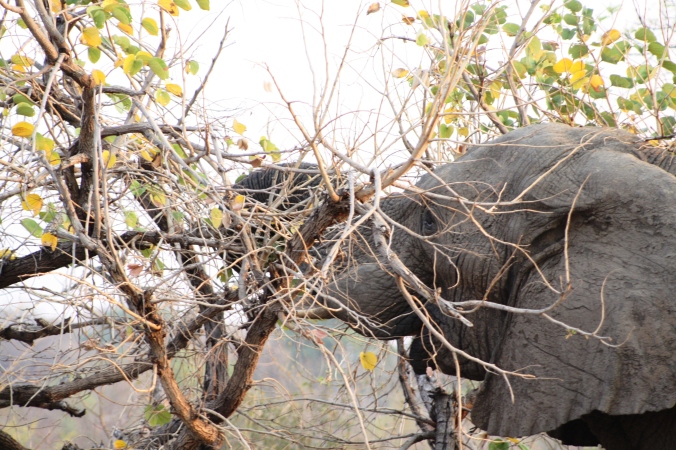 Not many green leaves on that tree 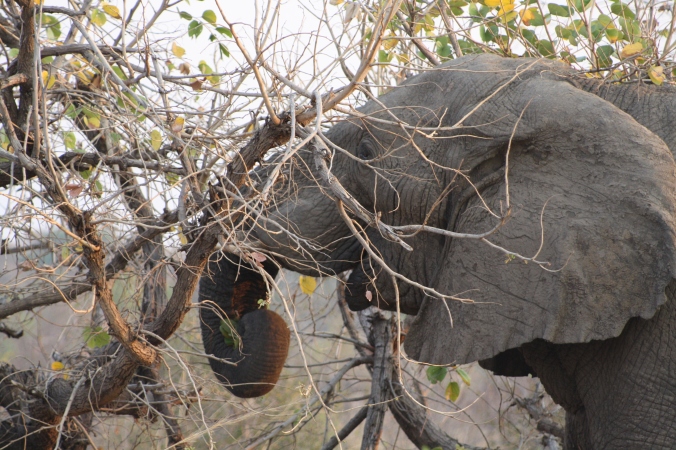 Two days after our close encounter we were again driving home through the park when we noticed a lot of dust blowing into the road up ahead. It was late afternoon, the sun was very low in the sky and visibility was not great, so we slowed right down; if a herd of elephants was about to cross we didn’t want to run straight into them. As we drew closer and were engulfed in the dust cloud we saw that it was indeed a large herd of elephants moving through the bush on our right hand side.

We were alongside the herd when suddenly, from the opposite side, a tiny baby elephant came rushing out of the bush – directly into the path of our vehicle. Thank goodness for Piet’s quick reactions (and for ABS brakes)! We screeched to a halt not more than two metres before hitting the elephant – who was now squealing with fright, his bum tucked in, his trunk straight out, his little legs a blur as he made the final dash to his Mum and the rest of his family.

In the moments before we gathered our wits and drove off we could hear his Mum reassuring him with her low, rumbling murmurs.

Thankfully we were in a different vehicle, not the elephant-chasing one. The elephants didn’t recognise us and we were left to carry on our journey home unscathed.

Last Tuesday we were driving through the park on our way home from town when we noticed a mini-bus parked on the side of the road. This usually means there is something worth looking at, so we slowed down to see what they had stopped for and pulled up behind them.  Every head in the bus was turned to the right, necks craning as they tried to get a better look at something there in the bush. We followed the direction of their gaze, struggling at first to see what it was – and then suddenly there they were! Lumbering slowly into view came an elephant cow with her very small calf and an older sibling also in tow.

She kept her calf tucked away, mostly out of sight

We sat watching and hoping for the opportunity for some decent photos when she suddenly lifted her head and looked directly into Piet’s eyes.  She uttered a low, rumbling sound, shook her head and started moving directly towards our truck.

It was around about now that I became distracted and forgot to take any more pictures!

At this point Piet engaged gears and quickly pulled out into the road. By the time we had passed the mini-bus the elephant was on the road, running after us and screaming; her ears pinned back and her trunk down. She too overtook the mini-bus, its stunned occupants gaping after us, open-mouthed.  She appeared intent on catching only us and it was only after we had retreated some distance that she turned around and loped off, back into the bush to join her two children.

The elephants in our park are not normally aggressive but I have a theory about why this cow took umbrage.  I reckon that she belongs to one of the many herds that regularly raid our crops in the winter months. The vehicle we were traveling in is the same one Piet uses for his nightly chasing-the-elephants-out-of-our-crops escapades. She most likely recognised the sound of the vehicle and probably also the smell of Piet, associating those two things with being harassed and deprived of our juicy, tasty maize (corn) and wheat when there’s not much else around to eat. She remembered her frustration and here was the perfect opportunity for her to show us just how annoyed he had made her so many times in the past.