Rio Savanne was a favourite holiday place for us to visit when my children were small.

Situated just north of Beira in Mocambique it was far away enough from civilization for us to completely unwind and relax and getting there was relatively simple and quick.

I say ‘relatively’ quick but it was still close to a twelve hour drive from our home. However, compare that to the 18 to 20 hours it took to drive to Coconut Bay – our other favourite destination – and you will get my point.

Then, there was the ‘relatively’ not so simple issue of the Fronteira, or border crossing.  The first time we crossed over, just after the civil war in Mocambique had ended, I think we were the first customers they had had for many years – no-one really seemed to know what to do with us (although in subsequent years that air of puzzlement and feeling of ‘organised chaos’ didn’t change, so perhaps that is just the way it is done).

We had managed to squirrel away a few US Dollars for the trip and our first hurdle occurred when we tried to use that to pay for our visa.

Ok, so where can we exchange Dollars for Mocambican Metacais?

He gesticulated wildly towards a scruffy building adjacent to the equally scruffy one we were in and we started walking off in that direction.

“Espera!“, Wait! He was becoming more and more flustered. So we waited while he took his pen (the only item that had been sitting on the counter) and locked it away in a room at the back.

He returned with an enormous bunch of keys and together we all traipsed across to the Banco. We had to wait while he muttered under his breath, rummaging through all those keys and trying them one by one in the door lock (there were only two buildings at the Fronteira, what all the other keys were for was anybody’s guess) until he finally exclaimed “esta aqui” and scurried inside.

He now obviously had his Banker Hat on. He went behind the counter and once there he put out his hand for the $100 bill, took it over to a till, opened it and rummaged around for a bit, all the time mumbling something to himself.

Then he shrugged, turned to face us and with a triumphant “non” he held both palms upwards, that universal gesture which means “there’s nothing”.

Now what? We can’t pay in US Dollars and the bank has no Metacais! Our holiday is doomed to never start! My children’s father started to become hot under the collar (and it was hot – we were all sweating) and one of the boys started to cry.

Our immigration official-come-banker crossed back to the other side of the bank counter, removed that metaphorical bankers hat and put on his Money Tout Hat. He dug his hand deep into his pocket, removed a whole fistfull of notes and we entered into an illegal currency exchange right there*. In the bank. With the immigration official.

Looking at the current Rio Savanne web site it seems things have changed a lot since those early days, when we used to park our vehicle on the other side of the river and have all our camping gear ferried across in a small wooden boat.

It always impressed me how effortless it seemed for these men to move all that stuff!

In those days the only accommodation was the tents you took with you and the only food you ate was what you cooked for yourself on a wood fire.

When the tide was low we could walk for what seemed like miles along to the mouth of the Rio Savanne, the boys always taking along their fishing rods and me my camera. 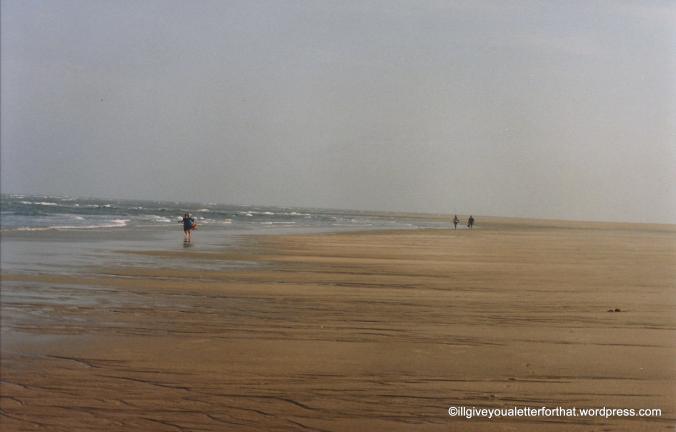 I love the patterns the retreating water makes in the sand. This was the days before digital photography, so I had to take pictures sparingly. But I was quite pleased with some of the results and thought these next few pictures will fit in very nicely with this week’s Cee’s Fun Foto Challenge theme, Abstract Photography. Pop over to have a look – there are some wonderful entries this week.

* In case you’re interested, a hundred US Dollars got us approximately twenty three million Metacais.