I recently travelled to the UK – to renew my passport, which is another story entirely – and not only did I get my entire family together for our first Christmas in 10 years but I was also lucky enough to experience my first proper snow.

On Boxing Day we went for a walk in the hills around Glossop – the views were breathtaking!

I don’t know if this first picture qualifies as true black and white since I took it in full colour but I love the effect of the white snow on the black tree trunks.

A few days after returning home I spotted this eagle perched in the dead tree above our bedroom:

And then a couple of days later we saw this Fish Eagle perched on a tree on the banks of the Zambezi River:

The other evening I was cooling down under the shower, unwinding after a particularly stressful and draining day when my peaceful reverie was shattered by a piercing yell.

Panicked, I threw on some clothes and rushed out of the room into the lounge, my hair still wet and full of shampoo. As I’ve mentioned before, Piet is normally a calm and placid person and to hear him in this state was quite alarming.

He was standing on the far side of the room, wordlessly gesticulating towards the kitchen counter which was piled high with foodstuff rescued from the rats in the storage cupboard (this year has been a bumper season for rats – our storage cupboard had been turned into a Rat Hotel and we were beginning to feel like nothing belonged to us any more).

As I moved towards the kitchen he frantically motioned for me to not get too close, so I skirted the stove – which forms a sort of divider line between the kitchen and lounge – and joined him on the other side of the room, peering towards the counter trying to see what he was looking at.

It took a while for me to register what I saw and then I had to blink a few times to make sure I wasn’t hallucinating; it seems not everyone was annoyed at the rat population explosion and someone had come in from the dark to have his dinner. 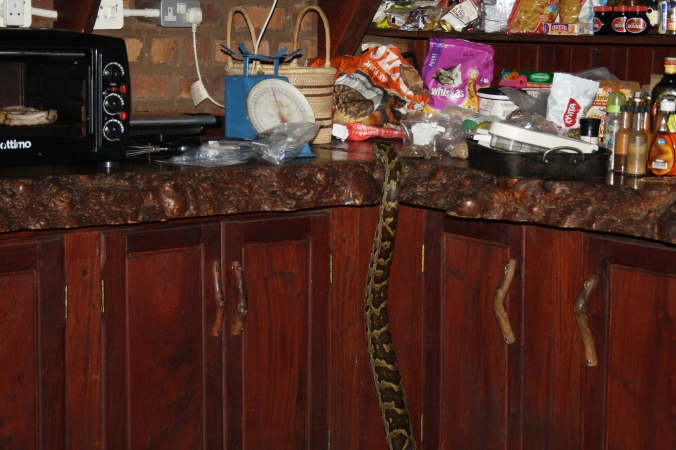 I don’t think he was after the dog biscuits

Once I had regained my breath I snatched up Tikkie and The Cat who had both come over to see what the commotion was about, ran back to the bedroom and shut them up in the cupboard;  that python was big enough to have me for a meal, those two would be pre-dinner snacks. Amazingly none of the other dogs took any notice – there was no barking, no warning growl – they all carried on sleeping as if nothing unusual was happening while Piet and I tiptoed around wondering what we should do next.

Although pythons are not venomous, one this size – we estimated, as best we could without getting too close, a length of about 4m and weight of 60Kg – can be very dangerous and would have either of us wrapped up in his coils in no time, and he would certainly inflict a nasty bite. We tried calling the local snake park, but being so late at night the owner was unable to round up enough men to help him with the capture (it would have needed at least 6 grown, strong men to restrain this giant).  We tried shouting but that had no effect (snakes have no ears). We tried stomping our feet – snakes ‘hear’ through vibrations on the ground – but he ignored us. And of course there was no question of killing such a beautiful, magnificent animal, even though he was trespassing in our home. So we had no option but to sit it out and hope he left in time for us to get some sleep.

Our guest seemed to be in no hurry. He sniffed around, climbed onto the counter and curled himself up to wait for dinner and at no time appeared perturbed by our presence – I would even say he was arrogant in his disinterest of us. 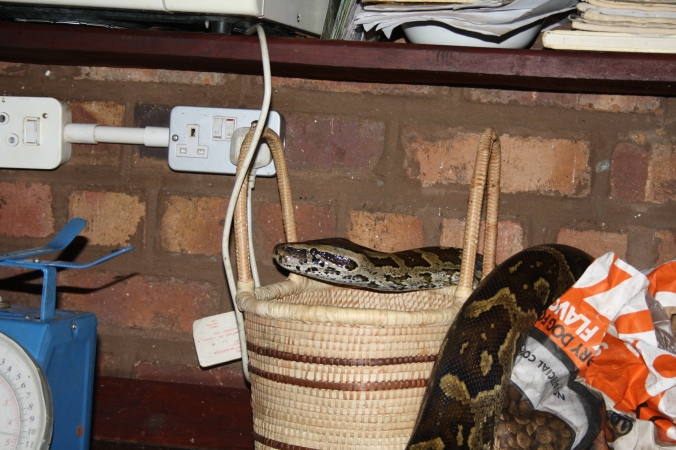 It was almost midnight (some four hours later) before this python realised there was nothing to be eaten here – the rats were strangely quiet, wisely cancelling their nightly football games in the cupboard for one evening – and he slowly started slithering onto the top of the storage cupboard, where he waited perhaps another hour before finally leaving the building.

Nothing to see here