The accident happened at around 10.00pm and within minutes the wreck was surrounded by ‘salvage experts’, all intent on making the most of this unexpected windfall. A handful of policemen arrived from town to guard the load but by midnight they were overwhelmed and a party was in full swing. So riot police were dispatched, tear gas was thrown and the revellers reluctantly weaved their way home.

In the mean time a wreck recovery company worked through the night, moving hundreds of crates of beer to the relative safety of their yard. This had to be done in stages and returning to the warehouse with the second load the driver was surprised to hear loud, joyful singing coming from inside the building. The security guard, whose job it had been to keep an eye on the beers, had taken it upon himself to do some quality control and he seemed oblivious when being reprimanded and relieved of his duties; he simply continued his song as he danced his way out of the yard, still clutching a half-finished sample.

By the next morning all that remained of the cargo was broken bottles strewn across the road, on the verge and in the bush. And a handful of stalwart party-goers who had somehow avoided the tear gas and the police. 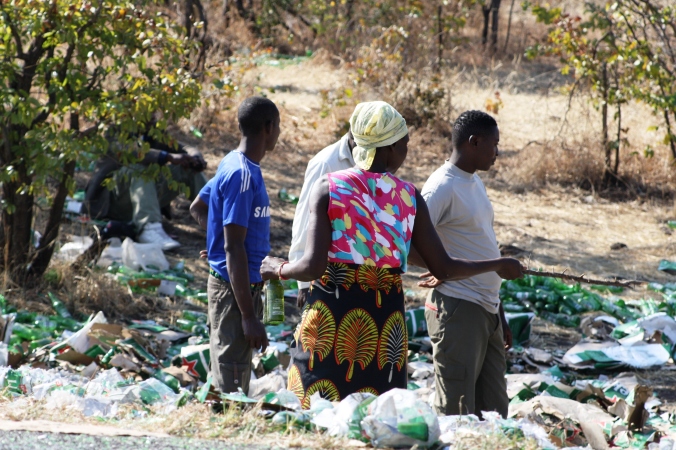 This young girl somehow managed to avoid all the broken glass with those bare feet!

This guy had obviously been there all night. We saw him offering advice to the crane operator and when that was ignored he lurched onto the road, stopped a passing taxi and handed some bottles to the driver in exchange for cash.

11 thoughts on “Christmas in July”

Photography.... that one moment in time...